3.1 Table 9 identifies the CIL rates that are proposed in the Preliminary Draft Charging Schedule.

Definition of 'extra care and retirement housing': Housing within Class C3 which is purpose built or converted for sale to elderly people with a package of estate management and care services as necessary and which consists of grouped, self-contained accommodation with communal facilities. These premises often have emergency alarm systems and/or wardens. These properties would not provide the same level of care as residential care homes (Class C2) where residents do not live in self-contained accommodation.

3.2 The proposed residential charges have been based on zones that reflect the average sales values in the Borough. Figure 2 shows the three proposed zones.

3.4 Extra care and retirement housing (see Table 9 for definition): Viability evidence has demonstrated that these types of development generate surpluses that can support a CIL charge to varying degrees dependant on the existing use of the site. On this basis, a rate of £20 per square metre across the entire Borough has been chosen.

3.5 Convenience based supermarkets and superstores and retail warehousing (net retailing space of over 280 square metres): Viability evidence has demonstrated that these uses are likely to be viable across the Borough with a maximum CIL rate of £106 per square metre. The 280 square metre threshold is drawn from the Sunday trading laws and is the threshold being used by a number of Charging Authorities. Although the charging schedule includes a split for retail based on the size of unit it does not try to differentiate between in and out of town. Whilst in policy terms a town centre/out-of-town centre split may be desirable, the rules on setting different CIL rates are strict. Because CIL is essentially a tax, Charging Authorities are not allowed to use 'policy' based reasons to determine the chosen rates. Where larger schemes do occur in the town centres, they are likely to involve demolition or change of use of existing buildings. CIL is only charged on the net increase in floorspace, therefore many town centre schemes, even if the resultant unit is large, will only include a modest net increase in floorspace. After allowing for a buffer, which is considered to be appropriate to deal with site specific issues, a CIL rate of £70 per square metre has been chosen.

3.6 In respect of all other uses, the viability study looked at offices, industrial and warehousing, other forms of retail (A1-A5) and hotels. It was found that at current levels these uses are unlikely to generate sufficient surpluses to accommodate a significant CIL charge; hence a nominal rate has been chosen. In addition, consideration was given to D1, D2 and sui generis uses but, given the large number of uses that fall within these categories, individual viability testing of the range of possible uses that could come forward has not been undertaken as it would be too complex to test all these uses with any degree of reliability. Therefore, a nominal rate is proposed for all uses that are not mentioned in paragraph 3.3, 3.4 and 3.5 on the basis that such a rate is unlikely to be a significant factor in developers' decision making and could be absorbed without having a significant impact on viability across the Borough but will contribute to the infrastructure to support the growth. There are some proposed exceptions to the nominal rate applicable to 'All other uses' taking into consideration the uses that will be placing a demand on growth associated infrastructure and those that will be providing the infrastructure required to support growth that CIL could possibly be spent on (i.e. as identified in the IDP and Regulation 123 Infrastructure List). Therefore, a zero rate will apply to any community facilities that are predominantly publicly funded or run on a 'not for profit' basis, including medical and health services, education, emergency services, community facilities, sport and leisure facilities. 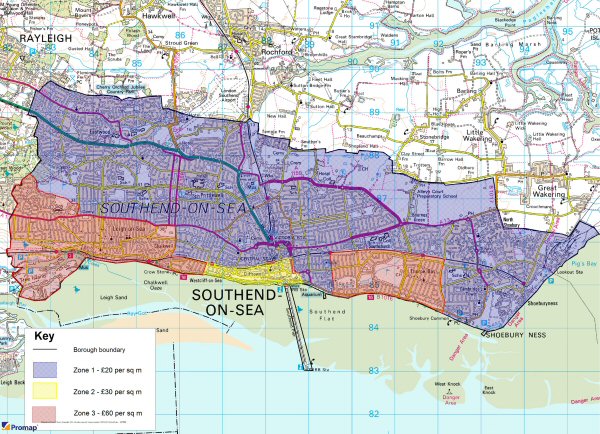 3.7 The precise amount charged for each development will be calculated in accordance with Regulation 40 of the CIL Regulations 2010 (as amended). As stipulated in the Regulations, all charges are based on the gross internal floorspace area. Calculating the chargeable rate will take into account inflation in accordance with the Building Cost Information Service (BCIS) of the Royal Institute of Chartered Surveyors 'All in Tender Price Index'. Hence, CIL liabilities will reflect the economic cycle to some extent until such time that the charging schedule is reviewed. Appendix 1 provides some examples of how CIL liabilities will be calculated.

3.8 In addition to the CIL liability, there may also be site specific contributions/provision requirements, including the provision of affordable housing. These will be dealt with through Section 106 planning obligations, Section 278/38 highway agreements or conditions. The viability study was not only concerned with CIL viability, but also considered the costs of affordable housing (so that delivery of affordable housing in the Borough is not adversely affected by CIL) and made assumptions about other contributions which might be required. Further details can be found in the Viability Study (see paragraph 2.1 for link to document). The rates are therefore considered reasonable, taking into account all financial burdens being placed on development.

3.9 It is difficult to estimate the likely income from CIL as development can be unpredictable particularly as the majority of development will be on brownfield sites within the Borough. Any estimate is highly sensitive to multiple assumptions. However, the Council's Annual Monitoring Reports monitor residential, Use Class B1-B8, A1 and A2, and D2 development. Information available in relation to these uses over a three year period, including 2009/10, 2010/11 and 2011/12, has been analysed to allow the following projections should development continue in a similar pattern to the last 3 years:

There was a loss of this floorspace during this period so there would have been no CIL income.

There was a loss of this floorspace during this period so there would have been no CIL income.

3.10 Based on average s.106 income from the last six financial years (see Table 10) and assumptions as detailed above, the following outlines the projected annual/monthly income from CIL and s.106 planning obligations (site specific obligations only that will continue after April 2015):

3.11 If a charging schedule were to be in place by the start of FY 2015/16 then six years would remain of the plan period up to 2021, and based on the above projections, this could generate £2,572,560 in CIL income. However, this figure simply reflects a projected maximum sum and does not take into account the 'lag' period, mentioned in footnote number 12, or the neighbourhood proportion that will need to be deducted as outlined in paragraph 1.13.

3.12 Taking into account the emerging growth targets for the area and economic viability, CIL could potentially raise £2.5million towards the £103.4million funding gap identified up to 2021, leaving £100.9million to be found through other means and/or prioritising infrastructure provision.

3.13 As outlined above, the funding gap is of such significance that it is highly unlikely that CIL income will exceed the identified funding gap, therefore Southend Borough Council can demonstrate a requirement to charge a CIL at the rates proposed. CIL will not generate sufficient funds to pay for the entire infrastructure needs across the authority area but will make an important contribution to infrastructure funding, even if as match funding. The Council will set out its intentions for how revenue raised from the levy will be spent in its published Regulation 123 Infrastructure List (see Appendix 3 for draft).

Do you agree with the rates outlined in Table 9. If not, please provide a justification and evidence in relation to any proposed alternatives.

Are there any significant uses that we have missed out from Table 9 that should be included? If yes, please provide reasons why considered significant.

Do you agree with the proposed zones as shown in Figure 2. If not, please provide reasons why and suggested alternatives.

[12] The 2012 AMR states that "The implementation of all outstanding residential planning permissions would result in an additional 2,027 net additional dwellings, of which 1,706 are predicted to be delivered in the next five years, meeting the 5 year housing supply target + 5% of 1,670." This shows that a significant number of dwellings will pay no CIL having secured permission prior to the introduction of CIL. Hence, the projected CIL income may not be realised for 3 years i.e. until new permissions granted subject to CIL are implemented.